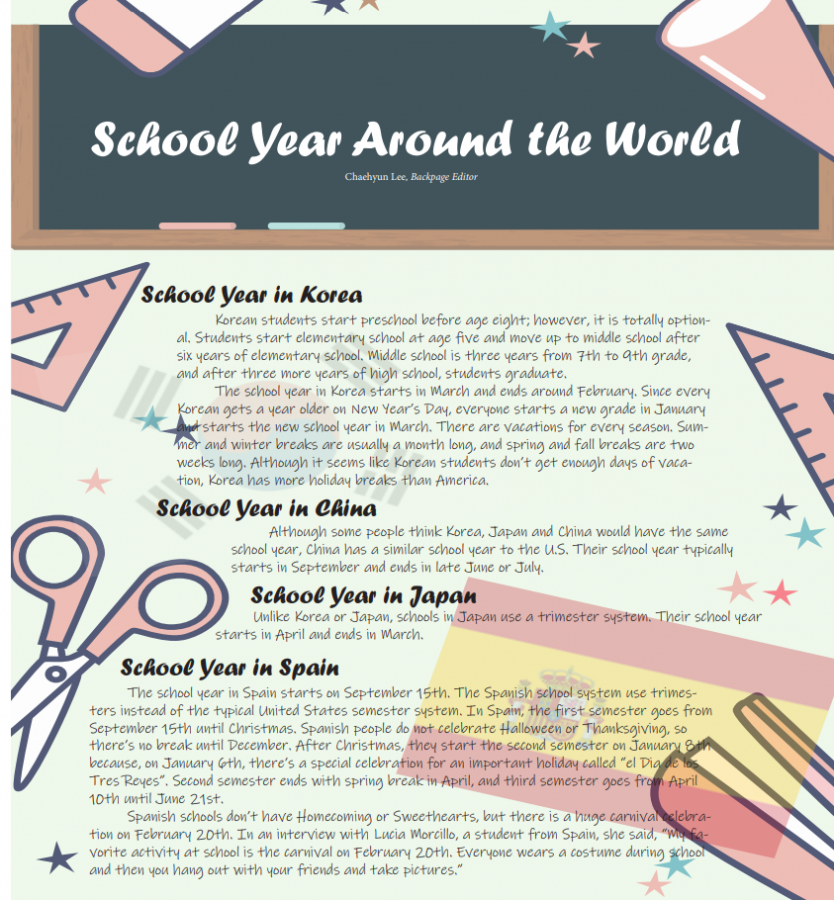 The school year in Korea starts in March and ends around February. Since every Korean gets a year older on New Year’s Day, everyone starts a new grade in January and starts the new school year in March. There are vacations for every season. Summer and winter breaks are usually a month long, and spring and fall breaks are two weeks long. Although it seems like Korean students don’t get enough days of vacation, Korea has more holiday breaks than America.

Although some people think Korea, Japan and China would have the same school year, China has a similar school year to the U.S. Their school year typically starts in September and ends in late June or July.

Unlike Korea or Japan, schools in Japan use a trimester system. Their school year starts in April and ends in March.

The school year in Spain starts on September 15th. The Spanish school system use trimesters instead of the typical United States semester system. In Spain, the first semester goes from September 15th until Christmas. Spanish people do not celebrate Halloween or Thanksgiving, so there’s no break until December. After Christmas, they start the second semester on January 8th because, on January 6th, there’s a special celebration for an important holiday called “el Dia de los Tres Reyes”. Second semester ends with spring break in April, and third semester goes from April 10th until June 21st.

Spanish schools don’t have Homecoming or Sweethearts, but there is a huge carnival celebration on February 20th. In an interview with Lucia Morcillo, a student from Spain, she said, “My favorite activity at school is the carnival on February 20th. Everyone wears a costume during school and then you hang out with your friends and take pictures.”