Has Mother Nature Really Been Recovering During Quarantine? A Look at COVID-19’s Impact on the Envionment 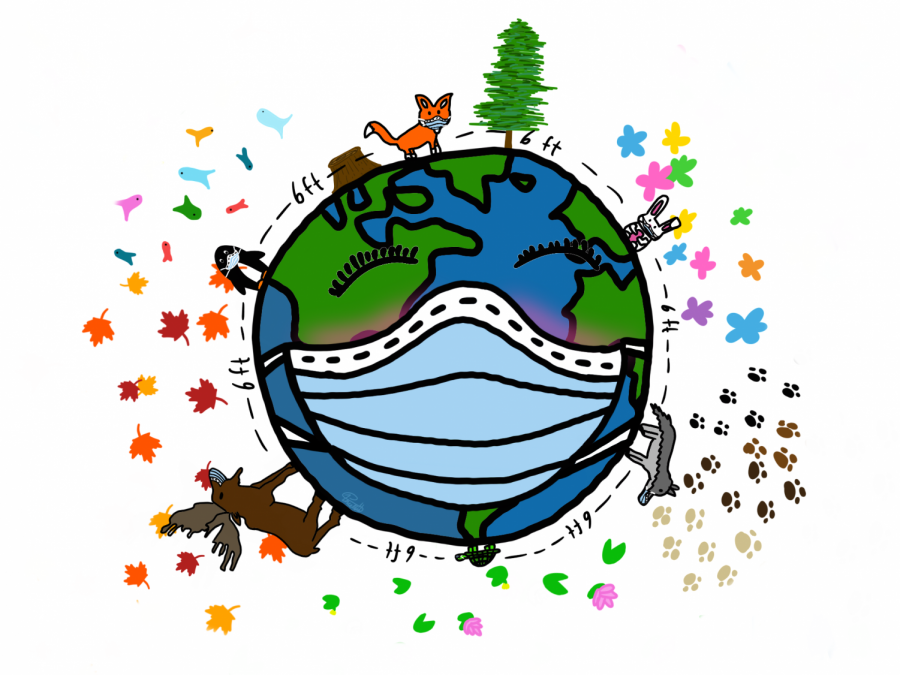 Over the past six months, the coronavirus pandemic has disrupted nearly every aspect of our day-to-day lives. Schools have been shut down, international and domestic travel has been disrupted, and all across the globe people grieve the loss of their loved ones and worry for others who have fallen ill. Yet amidst all these catastrophic effects, nature-lovers have identified one possible silver lining: that with humanity staying indoors, Mother Nature may have finally had the chance to recover from all the harm we have caused her in years past, and anthropogenic climate change may have become less of a concern as a result.

“To an extent, I do think that the Earth is recovering due to the pandemic,” said Jessica Weinberg, ‘21, an avid environmentalist and member of Earth Club at MHS. “For example, with the number of cars on the road reduced, the air quality in many cities has improved dramatically. Bodies of water have cleared up as well. With national parks vacant of tourists, animals have been able to roam freely without human disturbance.”

Weinberg’s explanation of a recovering planet proved correct — at least at first.

According to a BBC article written by Martha Henriques, “Will COVID-19 have a lasting impact on the environment?”, pollution levels in New York City dropped to nearly half those of last year during the initial shut down, largely due to a decrease in air contaminants from cars and other transportation. Carbon dioxide emissions plummeted world-wide as well. It seemed, briefly, that the centuries-long trend of steadily increasing greenhouse gas levels in the atmosphere had finally been reversed.

Yet while many environmentalists had hoped that the time indoors would give people a chance to reflect on their individual carbon footprint and re-evaluate many of the choices they make day to day, this does not appear to be true. The moment the economy started up again, many people went back to life as normal and CO2 levels returned to the alarming levels of years past.

The National Geographic article “Why COVID-19 will end up harming the environment,” by Beth Gardiner, notes that, while carbon emissions had dropped by nearly 17% compared to last year in April, they were only 5% lower in June, with many other businesses and activities continuing to open up in the months that followed.

“We still have the same cars, the same roads, the same industries, same houses, so as soon as the restrictions are released, we go right back to where we were,” said Corinne Le Quéré, a professor of climate change in England in an interview with National Geographic for the article. Without a dramatic redesigning of human infrastructure, it is nearly impossible to create a lasting change in greenhouse gas levels.

The dangerous effects of climate change became painfully clear across the west coast of the United States these past few weeks. Hundreds of fires still blaze through Washington, Oregon and California, burning to the ground enormous quantities of forests, farmland and human development and turning the skies an eerie orange color like scenes from a science-fiction movie.

According to data published by CNN on September 11th, 2.5 million acres have been destroyed in California alone, a statistic that shatters previous annual records even though the state’s fire season—set to continue through October or November—is far from over. Even with the dramatic drop in greenhouse gas emissions just months earlier, the extreme weather conditions caused by increasing global temperatures were still devastating, even more so than in other years. Regardless of seemingly positive environmental change directly following the global shutdown, it is evident that more concrete, permanent plans are needed to ensure a safe future for both Mother Earth and younger generations.

Furthermore, concern over germ transmission has led to an additional set of environmental problems caused by COVID-19. For example, many products now require more packaging to ensure that they are not contaminated. Together with the world-wide demand for disposable PPE equipment, this has led to a dramatic increase in the production of single-use plastics. Additionally, for many MHS students like Weinberg, many of the steps they would normally take to stay green have been disrupted due to the virus.

“It’s gotten harder for me to use public transportation,” Weinberg said. “It has always been a challenge given that I live in the suburbs, but with public transit still being very risky and unsafe because of the pandemic, I’ve had to avoid it completely. I’ve also had to stop using public water fountains when I go to parks or stores due to the fear of them being contaminated.”

Whether we wanted it to or not, the COVID-19 pandemic forced people around the world to slow down, step back from everyday activities, and re-examine the world around us. If anthropogenic climate change wasn’t clear enough before, the obvious link between the global shutdown and the carbon emission drop in March makes it undoubtedly certain that there is not only a correlation between human activity and climate change, but a direct cause-effect relationship.

Now, in September, we are at a pivotal point in our species’s relationship with the Earth. As things continue to open back up and return to normal, we can choose to either revert to old habits of pollution, wastefulness and environmental damage, or we can use this moment to redesign our world. We can commit to using clean energy–as individuals, as a nation, and as a globe. We can work toward reducing our waste, recycling, and composting, and we can create plans to restore natural landscapes to their previous condition.

If there is yet another thing that the COVID-19 pandemic taught us, it is that in times of crisis, human ingenuity flourishes. In a matter of weeks, schools can be moved entirely online. Businesses can adjust to offer virtual services. Musicians can learn to perform for everyone on a screen in the comfort in their own home. What if we treated the climate crisis with the same inventive rigor? It is clear that our lack of response to it is not a matter of having no solution, but rather a complacency and attachment to current systems that resist change. Yet sooner or later, we are going to have to act.

“In my opinion, nothing is more important than protecting and preserving the environment,” said Weinberg. “The Earth was here long before any of us were, so to let it wither due to humanity’s mistakes would be irresponsible and a tragedy. I also believe that we owe it to our children and grandchildren to preserve the environment. We’re racing against the clock right now to take a strong stance against climate change, and I don’t think it’s fair to leave future generations with an uninhabitable or unsafe world.”