Pop Music Inspired By Classical Music: Is There a Superior Genre? 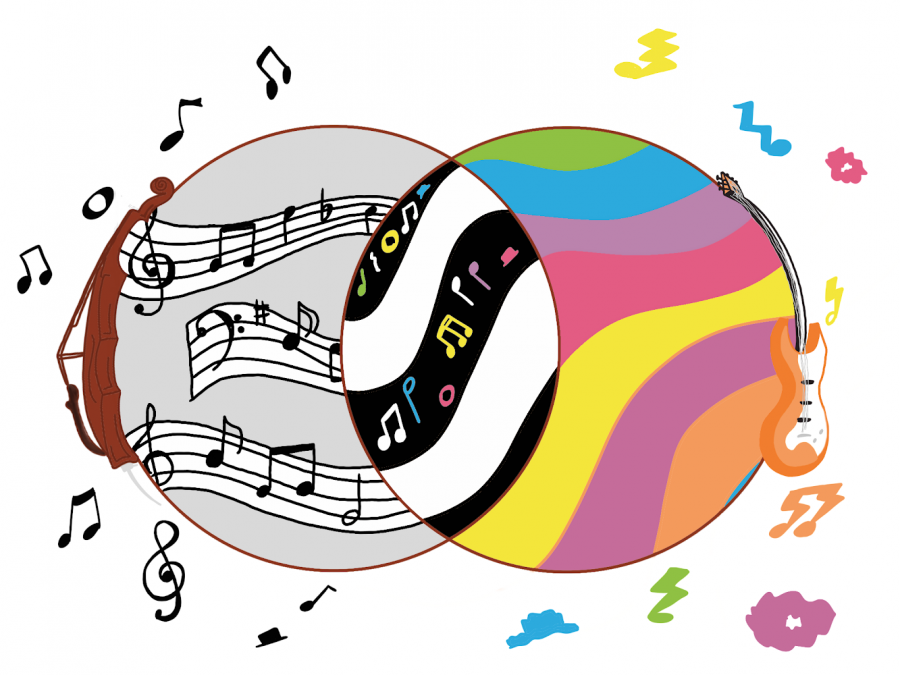 As the summer months come to an end, students are likely assembling some of their favorite summer tunes into playlists. Whether switching classes by transitioning through the halls or shifting from the island counter to the kitchen table, everyone seems to have their favorite genre streaming to lift their spirits between class periods. Some people prefer to relax with R&B, a few might shuffle through the halls dancing and stumbling over the lyrics to “Macarena,” and others may prefer to listen to classics like A-Ha’s hit, “Take On Me.”

Most communities are formed by similar music preferences. Others are open to dabbling into other genres. There are two genres, however, that always seem to clash: classical and pop. Arguments take place over which is the superior genre, and the dispute is not easily resolved. So, is pop music really much worthier of our attention, or is today’s community simply overlooking the significance of classical music?

To find the answer, it is important to consider why pop music is considered “popular”. A few key reasons could point to why classical music is sometimes deemed “outdated.”

First, it is generally easier to gain an understanding of the purpose of the composition as the tune is not typically very complex and connects with the listener the first time. For this same reason, one’s interest might become exhausted after a few times of listening to the song.

Second, one can easily relate to the lyrics in pop music as they tend to be applicable to the public’s interests and lifestyle. The listener also is not required to have a profound understanding of music to appreciate it.

Finally, popular music requires one’s attention for a minimal amount of time and sends short surges of adrenaline through one’s veins. Most people want the short term stimulation of pop music, resulting in its maximum length being only a few minutes long.

By looking at these reasons for pop music’s appeal, it can be inferred that classical music is relatively not as relatable to the public. The complexity and layering of instruments, extensive length of compositions, and lack of lyrics — with the exception of opera — does not resonate with the modern age.

However, what we call “classical music” today was actually the modern music of its time. The necessity of classical music can be understood by limitations of the era. There were no microphones and speakers; if people wanted to hear music, they had to go to live shows, and the only way to store music was to write it.

Conversely, in today’s world, amplifiers and electric instruments are used to create music. The fact is, using these products requires less skill to actually produce quality tone. Projection isn’t an issue when one is hooked up to a microphone. An electric violin can be played with little effort devoted to bow weight, where an acoustic violin requires intense concentration on this technique, the bow distribution playing an important factor because the bow weighs less at the tip than the frog. It is harder to project on acoustic instruments, and, therefore, orchestras require several of each instrument to produce a rich sound. The increased number of instruments also allows for more complex tunes, capturing the attention of the audience and making their journey to the live stage worthwhile.

For people today who actually take interest in classical music, a certain stigma also seems to surround the genre.

“There is a perception that classical music is for older people,” said James Williams, director of the Royal Philharmonic Orchestra in London.

However, not many people recognize the pop music that is actually inspired by classical music. A few examples include the following:

This song incorporates the main chord progression of Canon in D Major by Johann Pachelbel, a piece loathed by the majority of classical musicians for its overuse in weddings and TV commercials.

“It’s a beautiful piece, but it’s requested and played so much that it kind of ruins the beauty of it,” said Claire Acheson, ‘22, a classical musician in the Symphony Orchestra. “It’s just so overplayed.”

“All By Myself” by Eric Carmen

The second movement (Adagio sostenuto) of Sergei Rachmaninoff’s Piano Concerto No. 2 in C Minor, Opus 18 is an inspiration for Eric Carmen’s well known song, as he openly admitted. The violins in the orchestra carry the same tune as the piano interlude leading up to the chorus.

While the rhythmic dictation is slightly different, The White Stripes’ iconic guitar riff closely resembles the first movement of Anton Bruckner’s Fifth Symphony. Jack White, the lead singer and guitarist of The White Stripes, studied classical music as a young man, taking his inspiration from a lesser-known composer’s work and transforming it into what would become one of the most well-known stadium chants of all time.

In fact, without classical music, today’s modern music could not exist. Music theory — the study of practices and possibilities of writing, playing, and incorporating music — is derived from the classical music of Europe. Today’s top artists need to gain at least a basic understanding of music theory in order to create what some might call “sick beats.”

In reality, the structure of popular music is quite simplistic in comparison to classical music. Throwing a few complimentary chords together on a keyboard or guitar, assigning the tonic note of these chords to a bass, and putting a drum pattern on loop could take only a couple minutes of someone’s time to compile. Classical works, on the other hand, can take decades to compose, such as Richard Wagner’s Der Ring des Nibelungen, taking about 26 years from 1848 to 1874. The complexity of this music often indicates the intelligence of its composers. Not only do orchestral works have dozens of instruments contributing to the whole of the piece versus a handful in a typical boy band, the lines assigned to each instrument contain numerous variations in pitch, length of the notes, and ornaments as extra flare to the music.

Both genres are unique in their own way and appeal to different audiences. Whether it’s words or melody, music impacts best when the listener prefers the genre. Classical music was the “pop” music of its era and has stood the test of time. Music comes down to being an art and a means of self-expression. So whether it’s Beethoven’s Fifth Symphony or 5 Seconds of Summer’s “Youngblood,” there is no right or wrong genre, it’s all a matter of preference.