A Deep Dive into Award Shows over the Decades 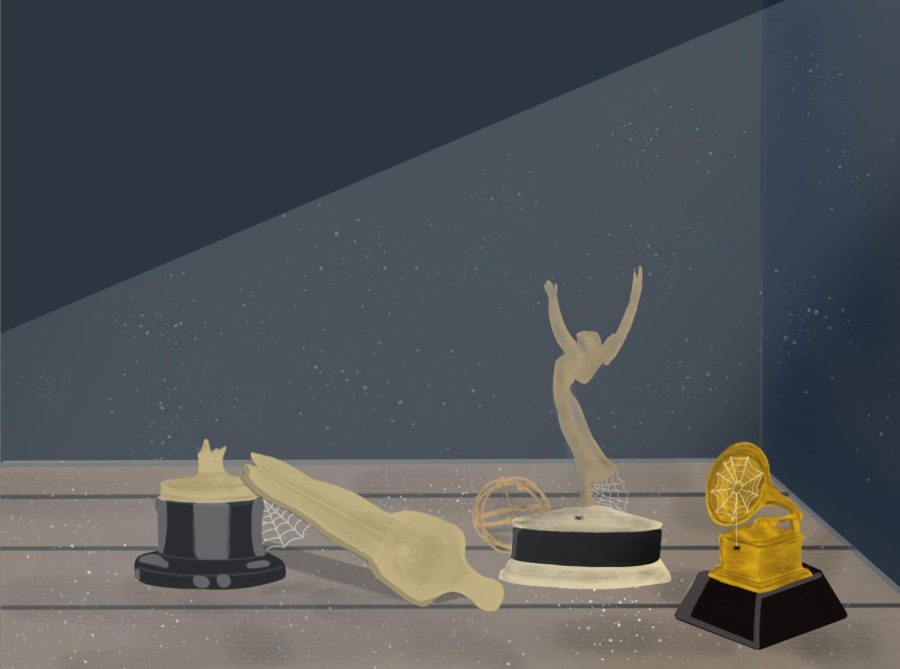 Historically, award shows such as the Grammys, Oscars, Tonys and Emmys have been exclusive events reserved for only the biggest celebrities and most influential people. Nowadays, however, these award shows are aired on television, enabling the eager public to see all their favorite superstars gathered in one place. During these once-a-year events, millions of viewers tune in to find out who will win one of the prestigious awards.

Kyra Martin, ‘24, said that she enjoys “seeing [her] favorite artists and actors receiving these awards.”

These awards shows have continued to evolve to accommodate viewers better and to advance with technology. Many influential people are beginning to use award show platforms to raise awareness of political and social issues.

In the 2021 Oscars, Regina King, who opened the show, talked about the conviction of Derek Chauvin for George Floyd’s murder. At the 2022 Grammys, Ukrainian President Volodymyr Zelensky shared a powerful video message to bring more awareness toward Ukraine’s fight against Russia. He urged viewers and attendees to “support [them] in any way [they] can, but not with [their] silence… Fill the silence with music.”

Despite these positive changes, there has been a recent decrease in viewership of these award shows which poses the question of whether they have reached the end of their era.

There are many factors that contribute to these declining viewership statistics. Some people think the shows are rigged. There have been many instances where well-known artists like BTS, The Weekend and Drake have topped the charts with multiple songs but have still not yet been awarded a Grammy. Many fans and actors have called out award shows as racist and xenophobic, as systematic racism has been a long-standing issue in Hollywood. For example, in the history of the Grammys, only ten Black artists have won Album of the Year as lead artists. Similarly, the 2022 Academy Awards lineup featured only four actors of color.

Many award shows have also been criticized and exposed for their scandals and misconduct. Following a Los Angeles Times exposé, NBC announced in May of 2021 that they would not be airing the 2022 Golden Globes due to criticism of the Hollywood Foreign Press Association, the organization that presents these awards. The article called out the corruption and lack of diversity in Hollywood Foreign Press Association (HFPA), highlighting how the organization had no Black journalists in their 87-member association. Although HFPA responded by announcing a plan to increase membership for journalists of color and to increase diversity overall, many actors and companies had already cut ties with HFPA. This caused the 2022 Golden Globes to occur as a private event that was not live-streamed on public TV.

In addition to this, many viewers argue that award shows are becoming too boring and long. With a live show, there are usually 16-20 minutes of commercials per hour, which means that, for a three-hour show like the Oscars, there can be an hour of ads that viewers have to sit through.

Robert Thompson, professor of Television and Popular Culture at Syracuse University, said to Rotten Tomatoes that “there are only so many people and only so many hours that they’re watching television…Between the time the Emmys start and when they finish, Netflix will have released three new series.”

Martin offered her opinion as well.

“Since award shows are generally long shows on TV, I think there needs to be an option where one can watch shorts on it. TikTok is a very popular social media app that is based on short videos. Basing award shows on something similar may attract more views, but it may be difficult to facilitate it,” she said.

With all the criticism against award shows, change is essential for maintaining an audience.